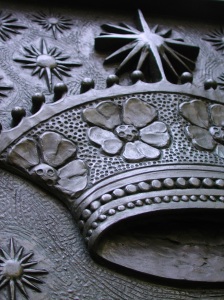 Where is our king?  In our previous posts, we highlighted the supreme delight and benefit that come from living under the yoke of kingship.  Though Israel’s kings had been dismal failures, they looked forward to a day when all of God’s people would live under the rule and reign of a righteous king.

So where is he now?  We have only to glance at a news program to shake our heads in dismay, our crumbling hearts testifying to the injustice that flickers before our eyes.  Are hope’s embers destined to be gradually extinguished?  Or is there another who could come in to breathe life and love and hope back into the world?

For Israel, their hope lay in God.  The previous enthronement psalms (which Randy covered last week) testified to a heavenly king—that God himself rules in majesty.  These enthronement psalms testify to an earthly representative who would carry on David’s line and bring God’s justice to the world.  So the people of the Bible hoped for two things: (1) that God would bring salvation and rule and (2) that an earthly king would lead them.  What these people never imagined—not in their wildest dreams—that both of these expectations would be met in the same person.

In his thorough analysis on the psalms, C. Hassell Bullock writes that all of the enthronement psalms ultimately point to the rule and reign of Jesus:

“The messianic vision, while not complete in the Psalms, develops somewhere in between. We can see this development more clearly in the prophets than in the Psalter. In fact, there is a self-contained messianism in the prophets that we do not find in the Psalms. In contrast, the messianic application of the Psalms develops within the interpretive process of the Jewish and Christian communities, although it is important to recognize that the raw material for the messianic vision is already laid out in the Psalms and is not merely an invention of those communities.” (C. Hassell Bullock, Handbook to the Book of Psalms, p. 183)

So when we read psalms such as Psalm 21—psalms that testify to Israel’s king’s power and justice—we must do so with the understanding that the psalter can only describe the ideal qualities of the king.  Only Jesus fulfills these qualities entirely.

King David describes the true joy that comes from obedience to God:

O Lord, in your strength the king rejoices, and in your salvation how greatly he exults! 2  You have given him his heart’s desire and have not withheld the request of his lips. Selah 3  For you meet him with rich blessings; you set a crown of fine gold upon his head. 4  He asked life of you; you gave it to him, length of days forever and ever. 5  His glory is great through your salvation; splendor and majesty you bestow on him. 6  For you make him most blessed forever; you make him glad with the joy of your presence. 7  For the king trusts in the Lord, and through the steadfast love of the Most High he shall not be moved.

Of course, we know that David’s obedience was often marred by poor decisions.  Only Jesus—the true king—lived a life of perfect obedience.  And the gospel says that the king’s righteousness—and its attendant joy—is granted to us through faith.

David next described his own dreams of justice:

8  Your hand will find out all your enemies; your right hand will find out those who hate you. 9  You will make them as a blazing oven when you appear. The Lord will swallow them up in his wrath, and fire will consume them. 10  You will destroy their descendants from the earth, and their offspring from among the children of man. 11  Though they plan evil against you, though they devise mischief, they will not succeed. 12  For you will put them to flight; you will aim at their faces with your bows. 13  Be exalted, O Lord, in your strength! We will sing and praise your power.

On the cross Jesus secured the justice of God by paying an unpayable debt.  True justice comes at last when Christ returns to set right the wrongs and offer renewal.

And, says Pastor James Stuart, because in Jesus God is both holy and loving, we find in Jesus a personality that mysteriously embodies the extremes of God’s character:

“He was the meekest and lowliest of all the sons of men. Yet he spoke of coming on the clouds of heaven with the glory of God. He was so austere that evil spirits and demons cried out in terror at his coming, yet he was so genial and winsome and approachable, that the children loved to play with him and the little ones nestled in his arms. His presence at the innocent gaiety of a village wedding, was like the presence of sunshine. No one was half so kind or compassionate to sinners, yet no one ever spoke such red-hot scorching words about sin. A bruised reed he would not break. His whole life was love. Yet on one occasion he demanded of the Pharisees, how they were expected to escape the damnation of hell. He was a dreamer of dreams and a seer of visions, yet for sheer stark realism, he has all of us self-styled realists soundly beaten. He was the servant of all, washing the disciples’ feet, yet masterfully he strode into the temple, and the hucksters and moneychangers fell over one another to get away in their mad rush from the fire they saw blazing in his eyes. He saved others, yet at the last, he himself did not save. There is nothing in history like the union of contrasts which confronts us in the gospels; the mystery of Jesus is the mystery of divine personality.”

If I follow a man like this, what does it mean for my life today?  It means that I turn on the news and react with sorrow—but not surprise.  I react to my sinful neighbors with compassion—but not hostility.  I endure suffering with tears—but not clenched fists.  And it means I live a life that relentlessly pursues joy—not temporary happiness.

Sermon - "We are Corinth, Corinth is Us"January 6, 2019
Randy speaking