I thought I would take a break from the devotionals to tell you about a funny moment that happened at our pastoral staff meeting this morning — a moment that captured the different personalities of those involved.

Tim Lester preached this past Sunday, and he had his prepared PowerPoint slides with Scriptures and his main outline comments.

I (Randy) am not a neatnik about many things in life, but I do like words on a paper or presentation to be just right — perfectly spelled and punctuated. 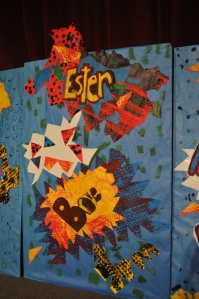 Tim does not share this by nature, not always being really quite sure how to spell something. And so I immediately noticed that he spelled Esther throughout his slides as “Ester.”  It made me recall how, during the art work associated with the recent kids’ musical program on heroes of the faith, that the children also spelled it “Ester.”  (see picture)

So, I was teasing Tim about how he spelled it. And he said, “No, no way … I ran spell-check on it to be sure everything was just right. So how could that be?”

“Well,” said Chris. “The spell-check probably corrected it from the proper name of “Esther” to “ester” because it was thinking you meant to talk about esters — which are a type of chemical compound.”  He then went on to explain how esters in fruit are very powerful, illustrated by how, for example, after eating a banana, everything after that tastes like a banana, at least for a while.

So … Tim screws up spelling, Randy sees it immediately, and Chris gives the scientific explanation for why it happened. Just another day with the staff.

A study of ancient world history—of the two thousand years before the time of Christ—is not a great deal different from the study of Jewish history. They overlap continuously.

As a second day of giving background for the story of Esther, let’s focus in a bit more on the specifically Jewish background.

Picking up after the time when the kingdom divided after Solomon into the northern 10 tribes and southern 2 tribes (which you know from memorizing the dates from yesterday’s post was 931 BC), it was a time of largely spiritual declension in Israel and Judah.

Not a single one of the kings that ruled in the north (Israel, sometimes a.k.a. “Ephraim”) was a good king who served God; and because of their idolatry, God gave them over to being conquered by the Assyrians. Out of this intermingling of peoples came those known as Samaritans in the time of Christ.

The southern kingdom had a number of good kings, though a larger percentage did not follow the Lord in their lives or leadership. And so God gave Judah over to the Babylonians, with the famous King Nebuchadnezzar coming on three occasions to besiege Jerusalem (605, 597, 586 BC). The captivity in Babylon was to last for 70 years, with the clock beginning in 606-605 BC … 70 years because for 490 years the Jewish people had failed to observe sabbatical years. Every seventh year they were to leave the ground fallow, and God promised to provide enough in the sixth year to cover for their needs. But they did not obey, and God is so faithful to his word that God gives justice to the dirt of the earth!

After the 70 years were up and the Babylonian Empire had been overtaken by the Medes and Persians, the faithful amongst the Jewish people were to understand that they should return to the promised land of God’s covenant blessing. The opportunity came right away with the first Medo-Persian king: Cyrus …

2 Chronicles 36:23 “Thus says Cyrus king of Persia, ‘The Lord, the God of heaven, has given me all the kingdoms of the earth, and he has charged me to build him a house at Jerusalem, which is in Judah. Whoever is among you of all his people, may the Lord his God be with him. Let him go up.’”

The total number of those who returned was around 42,360, in addition to 7,337 slaves and 200 singers (Ezra 2:64-65).  It should be noted that many Jews chose to remain in Babylon, but those loyal to Yahweh’s purposes chose to return to Jerusalem following Cyrus’ decree.

Was it a sin for the people of Israel to remain in Persia?

We should first note that the roughly 50,000 that had already returned was only a small percentage returned to Jerusalem.  Just how many remained behind is uncertain, but we know from the subsequent return under Ezra that many had stayed behind. And, in Nehemiah, we meet a man who remained behind as “cupbearer to the king,” who only returned once the city came under dire need.

It’s easy to imagine that those who stayed behind did so because they had become engrossed in the opulence of Persian culture, and a return to the land would represent an unwanted—and for some, seemingly unnecessary—hardship.  But we find several texts that illumine the explicit commands of God to return:

Leave Babylon, flee from the Babylonians! Announce this with shouts of joy and proclaim it. Send it out to the ends of the earth; say, “The Lord has redeemed his servant Jacob.” (Isaiah 48:20)

Flee out of Babylon; leave the land of the Babylonians, and be like the goats that lead the flock. (Jeremiah 50:8)

Flee from Babylon! Run for your lives! Do not be destroyed because of her sins.
It is time for the Lord’s vengeance; he will repay her what she deserves. (Jeremiah 51:6)

Further, Deuteronomy 28 chronicles the coming judgment of God in the scattering of His people during exile. The scattering would represent a “curse.” Therefore, in every biblical sense, the people had grown comfortable living in cursed circumstances.

Said another way, God’s program with Israel to this point had centered on blessings associated with geography. He had taken Abraham to the land, He had fiercely ensured that Moses and the Israelites returned to the land. So if you were reading the OT to this point, it would seem quite strange for anyone to remain outside the land that God had been so gracious in blessing His people with, and had been so ferocious in ensuring they found security in.

So while we can’t point to an explicit text that labels these people as explicitly sinful, they are certainly living outside of obedience and adherence to God’s program. Note that the name Mordecai comes from the Babylonian god Marduk, and similarly, Esther is a derivative of the god Ishtar. We might see this as indicative of some form of covenantal nominalism—abiding in Persia in both body and spirit.

But what is encouraging to us is that, even if they were not God’s all-stars of obedience, they allowed God to use them in a critical time of history. And God is willing to accomplish great things through any of his people who yield their lives to him.

As a part of this season of the year, we at TSF offer for you a number of classes and small groups to join. At 11:00 each Sunday morning (following the 9:30 service), we offer a handful of different electives.

Along with choices on walking through end of life issues and a class on parenting, there is an elective to discuss the morning sermon theme in greater detail and application. Over the next six weeks, Chris Wiles will be doing this. Here are some leading questions about what will be discussed.

Christ’s followers find themselves living as citizens of two cities: the city of God and the city of man.  Yet these two cities seem to be further apart than ever before.  How can we learn to apply the gospel to the issues of our culture?

Sept 13: A Tale of Two Cities: What is Culture?

Sept 20: What has IKEA to do with Jerusalem?  The Social Construction of Reality

Sept 27: “Not that there’s anything wrong with that:” The possibility of ethics in the late modern world

Oct 4: Arts and entertainment: Worship in the gallery, the theater, and the stadium

Oct 18: Redeeming tolerance: Gracious speech in an age of offendedness

We live in a strange time where the foundations seen to be undone. The news around the world is totally alarming, and we feel far from at home even in our own land. As Christians, the growing sense is that we are becoming a rather despised minority in many circles.

But we are not the first to feel this way. Our parents and grandparents lived through world wars, as have generations before them in tumultuous times. We never really should feel totally comfortable in this world; it is not our home ultimately.

But this is where we are right now. Does social comfort lead to spiritual apathy?  Can the church remain a clear voice in today’s society?  Is God in control?  Is He even there at all?

These questions weave their way through the story of Esther, an unlikely young woman who became Queen of Persia.  Yet her destiny would not be shaped by politics as much as the power of God. One of the most unusual features of Esther’s story is that God is never mentioned.  But He’s there—working behind the scenes, turning the wheels of history toward His glorious future.

Like Esther, you and I live as strangers in a strange land—a world in which the powers of man seem to outweigh the power of God.  How can we learn to practice faithful presence when God seems absent?   .   How do we learn to see God at work?  How does the story of Queen Esther point us to King Jesus?

I am going to guess that many of you are not deeply acquainted with the story of Esther. So in preparation for this six-week series, why not find a time this weekend where you read through it in one sitting. It will only take you about 15 minutes.

Sermon - "We are Corinth, Corinth is Us"January 6th, 2019
Randy speaking