The first of our seven words that we are studying in this series is a big one – propitiation. I am going to guess that it is pretty unlikely that you have used that word sometime this past week or two in common conversation. A simple definition would be “satisfaction.” The concept is bigger than merely that – involving also what made satisfaction possible – but this one word definition can get us started on understanding this doctrine and this “cross word.”

Have you ever been really angry about an unjust situation that came into your life – like, let’s say you just bought your dream car – a late model Benz 300 Series with only 40,000 miles. And sure enough, the next day this dude in an ’89 Ford pickup runs a red light and crushes the front end of your sweet chariot. Ugh! So, you have to go through an entire insurance process dealing with companies and police reports; and then you have to arrange to eventually take the car to the body shop … all the time wondering if you are really going to see the issue repaired. Then finally, when you get the car back … wow! The repair is so good that, in fact, the car looks better than it did when you bought it. And you are SATISFIED. Your anger is soothed and the debt is paid … the situation is rectified to your total satisfaction and you are at peace. In Bible theology talk, we might say that you have been “propitiated” … or that there has been a “propitiation” for your anger.

When you think about all the religions of the world who have presented their ideas about their “gods,” always included is the notion that the gods are angry – that they need to be placated in some fashion to keep the worshiper from being smashed like a stink bug. Remember the story of Elijah and the prophets of Baal? (1 Kings 18)  All the prophets of Baal built an altar and put a bull on it; then they called out “O Baal, hear us” and danced around, even cutting themselves in an effort to get their gods to send fire. After hours of this bizarre scene, Elijah even begins to taunt them – asking if their gods are asleep, or perhaps on a vacation cruise. And finally, God’s prophet comes to Him in the divinely-prescribed way – in faith with the sacrifice of a lamb. There is no display of human effort or deeds to appease an angry God, rather the sacrificed lamb pleases God – satisfying Him, and the answer is sent in most dramatic fashion.

And so, on the cross of Christ – the Lamb of God who takes away the sins of the world – the sacrifice of God’s perfect Son who takes our place of judgment – satisfies God’s wrath toward sin. Yes, God is angry at sin (as we talked about yesterday), but the payment of Christ is more than sufficient. The credit that covers the debt is enough to please God. And the passage today – written to those who already have that relationship with God through Christ – teaches that if any of them sin, there continues to be credit in the account that is sufficient to satisfy God. In fact, that credit is enough not only for them, but for the sins of the whole world (though not all accept and apply the payment).

In verse 2, the New International Version translates the Greek word hilasmos – which means “propitiation” by the words “the atoning sacrifice.” Many other translations have kept the actual word “propitiation” without giving an explanatory equivalent. The rest of the reading today goes on to a sort of application in our lives as it would relate to first obeying God, and then loving others. Essentially, if God has so forgiven us, it certainly would not look like we are the real deal if we cannot forgive another Christian for their sins against us.

This is good stuff … but it gets even better tomorrow!

2:1 My dear children, I write this to you so that you will not sin. But if anybody does sin, we have an advocate with the Father—Jesus Christ, the Righteous One. 2 He is the atoning sacrifice for our sins, and not only for ours but also for the sins of the whole world.

3 We know that we have come to know him if we keep his commands. 4 Whoever says, “I know him,” but does not do what he commands is a liar, and the truth is not in that person. 5 But if anyone obeys his word, love for God is truly made complete in them. This is how we know we are in him:6 Whoever claims to live in him must live as Jesus did.

We identify two new words in the puzzle again today:

Fall – By this, we are speaking of the “fall of man” – meaning the original sin that caused mankind to fall from a perfect relationship and standing with God… and incur the debt of sin and the curse of death.

Dark – Darkness symbolizes sin and stands as the opposite of God and light. The Bible speaks of a kingdom of light and a kingdom of darkness – the latter of which is defeated by the cross. Of course, at the time of the crucifixion, a darkness descends upon the earth at midday. 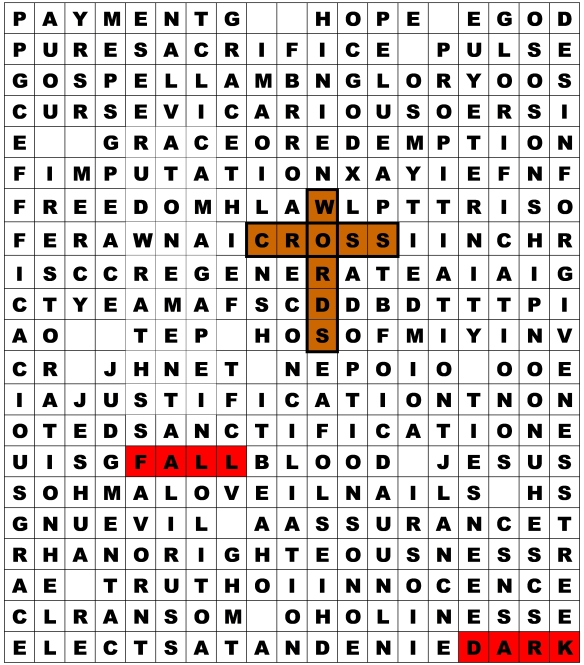