Over the years of coaching high school kids I have had some who start out with the cross country team in the fall of their freshman year and really perform well. They meet a whole new group of good kids and friends, and their high school career is off to a great start. But along the way, something happens to interfere with their early success. Usually it is something to do with a relationship – like a girl getting involved with a guy who distracts her from the disciplines of academics and athletics, or it could be a guy who simply chooses to travel with a bad crowd. It is terribly sad to see someone who started so well and had so much potential get off the tracks in the wrong direction.

But it has not only been with adolescents that I have seen this happen. Over the decades as a pastor I have sadly seen people come to know Christ, walk with him and serve well for a time, but ultimately make choices or be drawn away to a different crowd of people and perspectives. You can see them disintegrating in front of everyone and you can even confront it, but the attraction is strong and it often takes folks away from a healthy place in life.

We might term this spiritual declension “Back to Egypt Syndrome.” There were a number of times in the Old Testament where God’s covenant people ran off to Egypt when things got tough in the land of promise.

And in our passage today, Paul is writing to essentially ask the Galatians what happened that had taken them away from their previous strong position of faith in Christ. The issue was that a group of teachers had come into the assembly to promote the idea that along with the gospel message of Christ, the Old Testament Law requirements still needed to be kept. And Paul is battling this heresy by asking them in our reading today how they had come to faith originally – was it through Christ? or through the Law? … well of course it was through Jesus and their faith in him and his cross work on their behalf.

To support the argument, Paul tells them that their connection to God is not based upon their works of keeping the law, but rather upon faith. And the great father Abraham was likewise the same – not having his good standing imputed to his account because he performed a long series of prescribed deeds, but because he believed in God’s promise to him. His faith was credited (imputed) as righteousness.

The fact is that salvation has always been the same; it has always been by grace through faith. What has changed over time is the content of the faith. For Abraham, it was in God’s promise; and for the Galatians, it is in the work of Christ. But in neither case was it by the Law – which was not yet even given in Abraham’s day, and which served only to point out sin and the inability of man to be perfect. It was an instrument of condemnation, so why would they want to trust in that when they had the better way of knowing God through Jesus Christ?

People still do go “back to Egypt” spiritually. You have all that you need in Christ and by means of his righteousness imputed to your account.  Trusting God – even in the hard times – is the way of living by faith as well as being saved by faith.

3:1  You foolish Galatians! Who has bewitched you? Before your very eyes Jesus Christ was clearly portrayed as crucified. 2 I would like to learn just one thing from you: Did you receive the Spirit by the works of the law, or by believing what you heard? 3 Are you so foolish? After beginning by means of the Spirit, are you now trying to finish by means of the flesh?  4 Have you experienced so much in vain—if it really was in vain? 5 So again I ask, does God give you his Spirit and work miracles among you by the works of the law, or by your believing what you heard? 6 So also Abraham “believed God, and it was credited to him as righteousness.”

7 Understand, then, that those who have faith are children of Abraham. 8 Scripture foresaw that God would justify the Gentiles by faith, and announced the gospel in advance to Abraham: “All nations will be blessed through you.”  9 So those who rely on faith are blessed along with Abraham, the man of faith.

10 For all who rely on the works of the law are under a curse, as it is written: “Cursed is everyone who does not continue to do everything written in the Book of the Law.”

Cross Words for today to add to the word search puzzle:

Elect – This is a controversial word, as is the doctrine of election. But the Bible says that believers are the elect, and it is a word that does mean choosing. The argument is about what is election based upon, and that is a subject for another day!

Adoption – This is a wonderful cross word and concept – to have been taken into the very family of God as his own children!

Sonship – The New Testament speaks often that believers are members of God’s family, and this is called sonship. 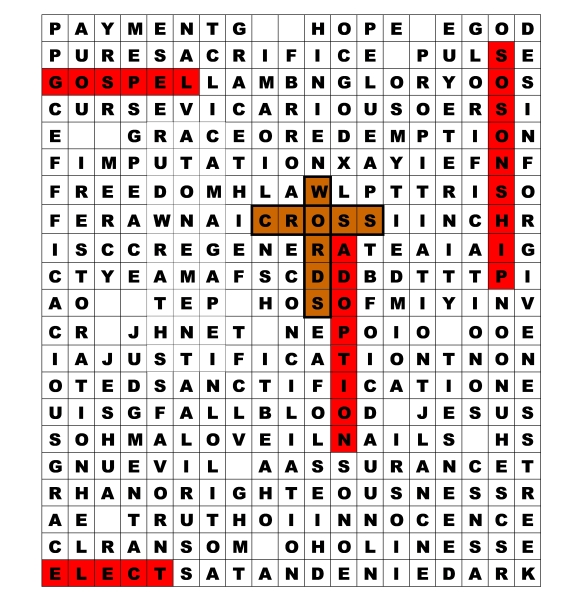