I have a ministry friend who is famous for telling stories to illustrate what he is talking about. They are really good. But sometimes it gets a bit old and everyone around sighs with a little bit of a “here we go again” feeling. Abraham Lincoln had a reputation like this as well, always quick with a folksy story to make his point.

That might likely be how the Pharisees felt about Jesus when he went into one of his parables. But truthfully – Jesus could put out about 10 zingers in the time it takes my buddy to get through the details of a single account.

In answer to the question “Who is my neighbor?” – a question the lawyer thought was a hit back over the net at Jesus that would be difficult to answer – Jesus tells this story:

30 In reply Jesus said: “A man was going down from Jerusalem to Jericho, when he was attacked by robbers. They stripped him of his clothes, beat him and went away, leaving him half dead. 31 A priest happened to be going down the same road, and when he saw the man, he passed by on the other side. 32 So too, a Levite, when he came to the place and saw him, passed by on the other side. 33 But a Samaritan, as he traveled, came where the man was; and when he saw him, he took pity on him. 34 He went to him and bandaged his wounds, pouring on oil and wine. Then he put the man on his own donkey, brought him to an inn and took care of him. 35 The next day he took out two denarii and gave them to the innkeeper. ‘Look after him,’ he said, ‘and when I return, I will reimburse you for any extra expense you may have.’

36 “Which of these three do you think was a neighbor to the man who fell into the hands of robbers?”

37 The expert in the law replied, “The one who had mercy on him.”

Jesus told him, “Go and do likewise.”

This story was really going downhill … no, really, it was. Jericho is about 800 feet below sea level, whereas Jerusalem is 2500 feet above it. The distance between the two places was 17 miles. So that is a drop of 200’ per mile. I need a bicycle path like that! 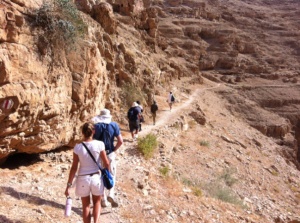 Beyond this, the road was notorious as one that was plagued with robbers and thieves. There were plenty of places for them to hide in the crooks and crannies and rocks, caves and valleys. So a story about a man being robbed, beaten and left “half dead” would have been very imaginable to these “locals.”

The first to pass him – a priest – clearly sees the man, as he actually “changes lanes” to get around him. The fact that Jerusalem was the center of worship and Jericho the home of as many as half of the priestly order suggests that this cleric was coming from the Temple. This was the equivalent of leaving the church parking lot and seeing someone on the side of the road in need, but passing by on the way to Sunday brunch at Panera Bread.

Offering no specific reason for the priest passing by, Jesus turns the focus now to a second Jewish religious leader. A Levite (family of Levi, but not through Aaron) was responsible for lesser tasks at the Temple. This means that while the same potential laws of defilement applied, his lesser duties made him slightly freer to offer aid if he felt compelled.

The text says that he too passed by on the other side. The wording in the original language would seem to say that he looked more closely – that he saw the man and checked him out before deciding to not get involved and help him.

The fact that both religious officials passed by is a clear indictment of religiosity without compassion – and could not have been lost on this audience as a sort of poke in the eye.

Finally a third man approaches, this time not a religious leader or even a Jew – but a Samaritan – and certainly at this point the listeners thought, “Oh no, the guy is really in trouble now!” We have often shared the centuries-old antagonism that existed between these “dirty half-breeds” and the Jews.

But instead, the Samaritan has mercy on the poor man, caring for him on the spot and making provision for his long-term recovery.

In tomorrow’s final section on this passage we will speak of some specific applicational thoughts, but let’s ask some questions for discussion and pondering…

Obviously we cannot help with every need and situation we become aware of, so where should we look to have a practical role in helping human suffering?

When we encounter a person in need – say, a homeless individual – what are the concerns and obstacles that give us pause in terms of immediately helping?

How can we make an encounter with a person in physical/material need to be more than merely that, but to also address spiritual needs and issues?

How can we be a “Good Samaritan sort of neighbor” in an intentional and regular way?