So I’ve noticed something recently.  More than in the past, weddings have become occasions for the bride and groom to inject their own distinct personalities into the wedding ceremony—and I mean that in the very best way possible.  Couples will often put extra thought and care into making the ceremony mirror the uniqueness of their relationship, even while retaining the more “traditional” elements we’re all used to seeing.

In fact, of the handful of weddings that I’ve performed in the past five years or so, nearly every couple included some additional “ritual” in the midst of the proceedings.  So while they’ve exchanged rings and said their vows, they’ve also done something else, something creative, as a way of illustrating what their marriage will be like in the future.  So, for instance, some couples do a “cord of three strands,” in which they braid three cords together to symbolize the way that husband, wife, and Jesus are now being woven into a unified, God-honoring relationship.  As another example, a couple poured two vials of colored sand together into a common vase—illustrating the way that two halves have now combined to form a whole.

Weddings are already laden with symbols and rituals.  Believe it or not, there’s actually a whole field of study devoted to symbols (it’s called “semiotics” if you want to sound smart at parties).  Experts in this field tell us that there are two broad categories of symbols: summarizing symbols and elaborating symbols—though for clarity it might be helpful for us to think about these things a different way.  There are some symbols and rituals that tell a story.  At a wedding, the exchange of rings is a storytelling ritual, because the ring testifies to the story of marriage.  But what about the “cord of three strands” or the sand art?  These are symbols that help us “play make believe.”  When a couple weaves together those cords, they’re playing make believe—the ritual serving to help them understand what marriage will look like in the future.

Christianity is full of symbols and rituals.  If that sounds like a weird way to describe your faith, just visit another church some Sunday.  You may very well find that this other congregation is used to a slightly different set of rituals and a different set of symbols.  I can remember a story a friend told me of a Church that every Sunday would turn around, face the rear of the sanctuary, and then recite one of the Church’s creeds (a “creed” is an official statement of faith).  Why face backwards? he wondered, but when he asked no one seemed to know.  He would later learn that when the church had first started, they placed the text of the creed on the wall at the rear of the sanctuary; the congregation would turn and face rear so they could read the words.  When enough people had it memorized, they took the words down.  But people kept standing up and facing backwards, and soon the ritual stuck.  And that’s…well, that’s kinda weird, honestly.

Rituals are something of a subset of worship.  Emile Durkheim—the father of what we know as “sociology”—famously defined religion as “the effervescence of the collective.”  It’s a fun phrase, really; it refers to the behavior that happens when people gather in groups.  So if you’re at a baseball game, and the crowd next to you starts “the wave,” you better keep it going, right?  Or think of the music they play to get the crowd to yell out “Charge!”  These are all rituals—we might even do them without even thinking. 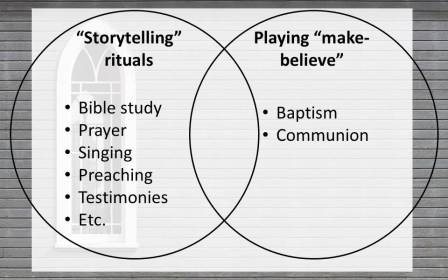 The Church practices a variety of rituals like this—and, maybe we even do these without thinking (!).  Some of our rituals are storytelling rituals—they’re like the rings at a wedding ceremony.  We gather, we sing, we read Scripture together, we pray.  These are vital to the life of the body of Christ, and vital to our own personal walk with Jesus.

But there are other rituals that help the Church “play make believe.”  There are two rituals in particular that the Church regularly practices:

First, baptism is woven into Jesus’ final commands to his followers after his resurrection:

19 Go therefore and make disciples of all nations, baptizing them in the name of the Father and of the Son and of the Holy Spirit, 20 teaching them to observe all that I have commanded you. And behold, I am with you always, to the end of the age.” (Matthew 28:19-20)

Baptism is something the Church is meant to practice.

Second, on the night before his death, Jesus commanded his followers to celebrate the Lord’s Table or Communion:

As we’ll see in the days ahead, both of these practices are ways that the Church “plays make-believe.”  I don’t use that phrase casually or flippantly—as we observed earlier, “playing” and the imagination is where a great deal of learning and growth takes place.  I’m actually borrowing the idea from a spiritual writer who targets the Lord’s Table in particular as a place of make-believe:

We might likewise think of baptism as making believe that we, too, are dying and being raised with Christ (cf. Romans 6:3-4).

Rituals—all rituals, from the sports stadium to the shopping mall—tell us something of who we are, where we’ve been, where we’re going.  Rituals are part of our identity as a church just as much as the “cord of three strands” is part of an identity as a couple.

Rituals are what help us enter into God’s story, a way of seeing our lives intersect with his.  It’s not for nothing that the Lord’s Table is little more than a shared meal, a chance to regularly remember and re-enact Christ’s sacrifice.

Baptism and communion therefore represent the core features of what makes a Christian Church.  A Church can be more than these two rituals, of course, but a Church that does not perform them cannot be said to be a Church in the New Testament sense.

In the days ahead, let’s spend some time unpacking these two practices, and come to a better understanding of what they mean for us.