I have often talked and written about my several years of life while serving in an extraordinarily wealthy church environment in Texas during my grad school education. There were two types of wealthy people I encountered. In the words of the title today, there were those who allowed wealth to be a destructive roots system in their life that actually grew out of control and choked them, and there were those who rightly saw their wealth as God’s gift to invest to build foundations in heaven that could never fade away.

Paul addresses the issue of money, wealth, and the use of resources biblically …

6:6 – But godliness with contentment is great gain. 7 For we brought nothing into the world, and we can take nothing out of it. 8 But if we have food and clothing, we will be content with that.

What “stuff” do we look for in life … really … that satisfies?  Often it is thought of as great accumulation, but in fact, the thing that satisfies is contentment. That is a state of being free of worry or fear, yet also not having any sense of needing to get more of something. Add to this a godly attitude – one that is tuned to the bigger picture that is more than just this world – but sees it all in a kingdom view – and you’ve really got something that is the ultimate gain.

The word for “contentment” means being self-contained, picturing something that is free of circumstances.

Over the years I have often been struck by the contentment and peace in the lives of Christians going through the worst circumstances, usually physically – threatening life itself. It is a gift from God to those who trust with a big-world picture of things.

It is good to learn as early in life as possible that contentment is our true need both mentally and emotionally, and we get that by having a spiritual viewpoint that this world is the brief reality in a larger kingdom plan of God.

6:9 – Those who want to get rich fall into temptation and a trap and into many foolish and harmful desires that plunge people into ruin and destruction. 10 For the love of money is a root of all kinds of evil. Some people, eager for money, have wandered from the faith and pierced themselves with many griefs.

The “want to” here is a word with more than just simple desire, but of a conscious decision to go after something – in this case, the accumulation of riches. It is not a bad thing to have riches as the result of hard work and regular responsibility; but making it as a burning desire and goal leads to six distinct dangers that Paul gives in these verses … 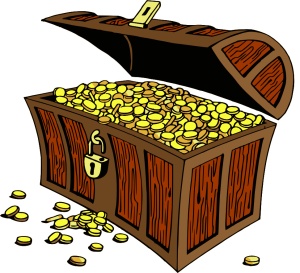 All in all, if money brought contentment, we would not regularly see the discontent and unhappiness – often to the point of suicide – of the wealthiest people in the country and world.

Here we see how the personal letter to Timothy was meant for a wider audience than just the younger disciple. And there are some natural tendencies that come along with wealth:

And the appropriate perspective to have is just the opposite of this, as the verse goes on to say….

… but to put their hope in God, who richly provides us with everything for our enjoyment.

18 Command them to do good, to be rich in good deeds, and to be generous and willing to share. 19 In this way they will lay up treasure for themselves as a firm foundation for the coming age, so that they may take hold of the life that is truly life.

Let’s summarize this whole thing with a single statement: Money can control you in this world as you allow it to grow destructive roots, or you can control it and build foundations of eternal value.

A proper view of wealth and resources is one of those “nuts and bolts” things that helps a church be great.  Just as there are varied attitudes and lifestyles of Christian individuals with wealth, the same is true of churches.

Let us see our corporate efforts as indeed investing for eternity and building foundations there, rather than being choked by the roots here!