We are made to be in community with others and to be people who are interdependent upon one another. Practically from DAY ONE, it was so … as God said it was not good for man to be alone, and thus Eve was created for Adam, toward the end also that they might multiply others who would be together, work together, and serve one another. So it is programmed inside us to be together and do together, finding joy and success in cooperative venture.

“Better Together” – This has become an attractive political slogan used by many over the years, not just recently. And this idea has merit. Great movements and great accomplishments involve masses of people working together, compelled by the vision of a leader to go in one direction.

At the same time, there needs to be a common bond of truth and purpose that unites people together to accomplish great things. So there is merit in finding the common bonds that unite people, beyond the things that make folks different from one another, and to coalesce around that truth to get past small-mindedness toward accomplishment together. 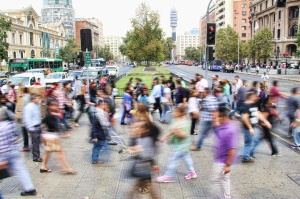 This idea of being better together and moving beyond small-mindedness is the major theme of week four of the #ForOurCity series. The entire concept of the body of Christ – with all of its varied parts and diversity – is that we need one another. None of alone have everything that we need; none of us is an island unto ourselves. We were made to be interdependent, and that is the way the early church functioned from the very beginning …

Acts 2:42 – They devoted themselves to the apostles’ teaching and to fellowship, to the breaking of bread and to prayer. 43 Everyone was filled with awe at the many wonders and signs performed by the apostles. 44 All the believers were together and had everything in common. 45 They sold property and possessions to give to anyone who had need. 46 Every day they continued to meet together in the temple courts. They broke bread in their homes and ate together with glad and sincere hearts, 47 praising God and enjoying the favor of all the people. And the Lord added to their number daily those who were being saved.

All of us who love the church of Jesus Christ and have given our lives to serving and leading it especially love this passage of Scripture. We long for our local congregations to have this sort of mutual affection and relationships. The word “together” is even included three times in these verses – being together, meeting together and fellowshipping together.

Often in sports we hear about the “locker room / clubhouse atmosphere.”  Some teams have it, other don’t. Just this past weekend a football team that lost a game they probably should have won had players calling out one another in the press. Not good. On the other hand, the team that pulled together to beat them is universally praised this year for the great atmosphere of older and younger players all pulling together and contributing to their success.

There is every reason for the church of Christ to have a great “locker room.”  It is the ultimate winning team with the greatest coach ever. There will be tough times, as Jesus said it would be so in this world. Like the legendary coach Vince Lombardi would say, “Sometimes the clock runs out, but we never lose in the end.”

In this Acts 2 passage, we often talk about the constituent elements we see listed here that comprise the well-rounded church: teaching, worship, fellowship, mutual service, public proclamation, etc.  But for today’s theme, notice the emphasis that all of these elements were being done together. And this is what was so attractive about it in the eyes of a watching world. The healthy church (and larger church community) that serves each other well in a genuine community of love by living out their faith is that family that outsiders often respect and may even want to know how you become a part of such a place.  #BetterTogether