As I set out to speak a few words on this theme today, I hope that you are all really, really interested in this topic! The reason is because in just a couple of weeks, beginning on March 2nd, the next sermon series of six parts will be called “In My Place: Why did the cross have to happen?”  And doing that is a decision made after this devotionals schedule was previously set in place with this title today.

So we will be delving into this essential question in great depth in the coming weeks, leading up to and finishing on Easter Sunday. But let’s take a quick shot at answering this question today. Obviously the quick answer is because of imputed sin that is on all of our accounts that we are unable to pay for ourselves.

But let’s talk first about what is real and what is a copy, or something temporary. We think that the physical things of this world are real; they are material. But spiritually speaking, the real stuff and the real reality is in heaven. Our worship, old and new, is a copy of that which is truly real. So the work of Christ on the cross in dying and paying for sin is not a copy of the Old Testament sacrifices nearly so much as they are a shadow of the true and better payment by Jesus – the perfect lamb of God.

The writer to the Hebrews picks up this theme …

Hebrews 9:11 – But when Christ came as high priest of the good things that are now already here, he went through the greater and more perfect tabernacle that is not made with human hands, that is to say, is not a part of this creation. 12 He did not enter by means of the blood of goats and calves; but he entered the Most Holy Place once for all by his own blood, thus obtaining eternal redemption.

So the work of Christ was not the shadow cast by the sacrificial system of the Old Testament era. Rather, the whole complicated rituals of atonement through animal sacrifices were a foreshadowing of the true event at the cross and before God in heaven itself. The Mosaic system was effective (“efficacious” is the word we would use in theology) for that time. But the real payment was that of the cross. The passage continues …

Hebrews 9:13 – The blood of goats and bulls and the ashes of a heifer sprinkled on those who are ceremonially unclean sanctify them so that they are outwardly clean. 14 How much more, then, will the blood of Christ, who through the eternal Spirit offered himself unblemished to God, cleanse our consciences from acts that lead to death, so that we may serve the living God!

The argument here is to say something like this. “If animal blood sacrifices of the old system worked to cover for sin (and they did), then how much better is the blood of the perfect, fully human, sinless Son of God, presented before God Himself (and it is)!”

Allow me to use my old and well-tested illustration. When you buy something from the store with a credit card, you have made a sort of “payment” that was effective for a period of time. You successfully carry the product out of the store and it is yours. But a day comes when a full and final and better and truly real payment has to be made. You get the point. That final payment was necessary to be made with real financial resources. 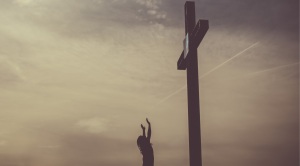 And after discussing some more details about the earthly “copies” of the OT system, the Hebrews writer continues a bit later in the passage …

Hebrews 9:23 – It was necessary, then, for the copies of the heavenly things to be purified with these sacrifices, but the heavenly things themselves with better sacrifices than these. 24 For Christ did not enter a sanctuary made with human hands that was only a copy of the true one; he entered heaven itself, now to appear for us in God’s presence. 25 Nor did he enter heaven to offer himself again and again, the way the high priest enters the Most Holy Place every year with blood that is not his own. 26 Otherwise Christ would have had to suffer many times since the creation of the world. But he has appeared once for all at the culmination of the ages to do away with sin by the sacrifice of himself. 27 Just as people are destined to die once, and after that to face judgment, 28 so Christ was sacrificed once to take away the sins of many; and he will appear a second time, not to bear sin, but to bring salvation to those who are waiting for him.

The real payment!  Made by the perfect high priest. Made in the real place. He did it once – not having to enter once for himself and his own sins, and then another time for the people. And he did it once for all – not ever having to be repeated again and again. The final NECESSARY payment was made.

The application is in the passage as well. Our earthly death and termination is not the end. There is salvation for those “who are waiting for him” – meaning those who have trusted in this payment rather than their own good deeds for eternal salvation.

You gotta love Hebrews!!  If you’re new to TSF and these devotionals, there is an entire series of 46 writings called “Endure” that you can read through the whole book.