Calvin Coolidge was famous for being a man of few words. Someone once told him, “I’ll bet I can make you speak more than two words.” To which the 30th president responded, “You lose.”

Among his quotes about listening much and speaking little are these: “I have never been hurt by what I have not said,” and, “No person ever listened themselves out of a job.”

I think it was perhaps also Coolidge who was asked, “Why do you always answer a question with a question?”  And he responded, “Why not?”

The Apostle Paul occasionally used this device as a communicative tool, as he does in our passage today. Paul asks a single question, and he then responds to it with a series of six additional questions that provide the answer. 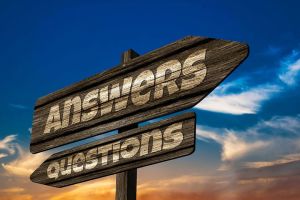 God’s plan was pretty amazing. It was laid out before it was even necessary due to the entrance of sin. Nothing catches God by surprise. He is never in a position of needing to alter the direction of his will due to some unforeseen contingency. God is a category of one! This leads to a series of profound questions in Paul’s mind…

It is all about who you know. It is like working for a company where you know the owner personally, and better yet, he really likes you. It therefore doesn’t matter what the immediate boss thinks and how he might attempt to harm you.

#2 – (verse 32) He who did not spare his own Son, but gave him up for us all—how will he not also, along with him, graciously give us all things?

If you gave $10 toward a benevolent agency and then it folded and your money was lost … oh well, bad things happen. But if you gave your whole fortune to a cause, you are going to be entirely supportive and invested in the success of that endeavor. God gave even more: His Son. Therefore we can count upon him furnishing us with all we truly need toward our ultimate salvation and glorification.

#3 – (verse 33) Who will bring any charge against those whom God has chosen? It is God who justifies.

Well, we know the answer to that is Satan. But what real authority does he have to accomplish anything other than to make a lot of noise? It does not matter what the prosecuting attorney says about you when the judge has already personally paid the price for your justification.

#4 – (verse 34) Who then is the one who condemns? No one. Christ Jesus who died—more than that, who was raised to life—is at the right hand of God and is also interceding for us.

Additionally, what standing does the evil one have? None really. The one who paid the price personally is our defense advocate who is right next to the judge to personally intercede for our cause.

#5 and #6 – (verse 35) Who shall separate us from the love of Christ? Shall trouble or hardship or persecution or famine or nakedness or danger or sword?

The presumed answer to the fifth question is “nothing.” Paul lists some items with increasing gravity, including the very real threat of being put to death by the sword. The Apostle wrote in 1 Corinthians 11 about how he faced all of these perils in the course of life and ministry. Frankly, that is the normal experience for the believer, as Paul writes about in Ephesians 6 concerning spiritual warfare. Peter affirms that if the enemies of the cross hated Christ, they will hate us also.

36 As it is written: “For your sake we face death all day long; we are considered as sheep to be slaughtered.”

The world has little regard for God’s people. To them we are nothing but sheep waiting for the slaughter. But even if the worst imaginable thing happens, the best thing happens immediately as well: to be absent from the body is to be present with the Lord. All of this is the outworking of the “all things” of 8:28.

37 No, in all these things we are more than conquerors through him who loved us. 38 For I am convinced that neither death nor life, neither angels nor demons, neither the present nor the future, nor any powers, 39 neither height nor depth, nor anything else in all creation, will be able to separate us from the love of God that is in Christ Jesus our Lord.

Come to church this Sunday for the kids musical production and you will hear these final three verses (and verse 35) set to a heavy metal rendition that you will never forget!  It is truly awesome! These kids will know these verses for the rest of their lives as this song will forever live within them.

The final verdict is that we cannot lose, no matter what happens. I like that! I like winning and I hate losing! We are secure in Christ’s love and in relationship with God for eternity. Let’s conclude with some questions: Who would not want this? Who would not be thankful for these truths? Who would not find peace in the midst of any circumstance by knowing this provision?