Today is the first of 15 devotionals over the next three weeks that look back almost three decades to when my oldest boys were roughly ages 8, 6, and 5 … or thereabouts. At that time, while pastoring in New Jersey, I wrote devotionals for a monthly newsletter. They were called “Life with My 3 Sons” … and later the title had to change to “… my 4 sons.”  My mother-in-law recently found these in her keepsakes and sent them to me. I had mostly forgotten about them. Reading them now is interesting, especially if you know these guys as young adults. If not, the stories recount common family life occurrences we all know, along with a biblical application. So have fun reading them. The first one begins …

One of my boys comes to me with a drawing – excuse me – a masterpiece of what could be best described as abstract art.

“Oh Nathan,” I’ll exclaim. “That is the nicest car I’ve ever seen drawn by anyone!”

I have learned my lesson. Never do I now respond with a speculation concerning what a particular piece of artwork is depicting. I make open-ended remarks like, “Wow, that is so cool. Tell me about this beautiful picture with all the colors!”

The pictures that children draw are a window to their minds and thoughts. And because of that, I was particularly pleased to hear Nathan’s explanation of the following sketch … 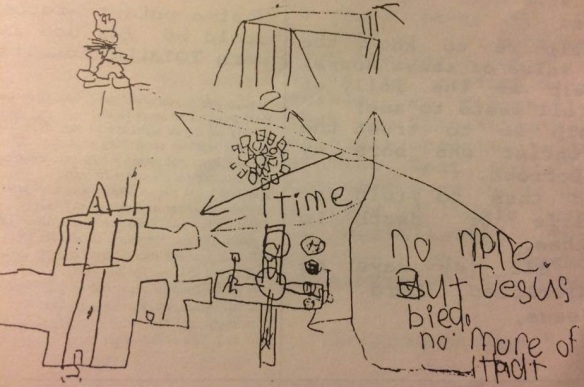 He drew this a few months back while sitting in church with Diana during an evening service, having had a Sunday School lesson that morning on the Tabernacle and Temple system of the Old Testament.

What? Oh? You need some explanation?

The upper left is the altar with the sacrifice on top. The top drawing is the tabernacle tent of meeting. The bottom-left is the Temple with the most holy place outlined. Of course, the bottom center is Jesus on the cross. And on the right is the explanation – “No more. But Jesus died. No more of that.”  Note that the arrows from the “no more” go to the sacrifice, the tabernacle, and the Temple. The “1 time” is listed over the cross.

Hey folks – there’s some very good theology in this drawing. And it is exciting as a parent to see your children learn the Word through their Sunday School teachers (in this case, Peggy McCormick). It illustrates the value of a good children’s education ministry.

Hebrews 7:27 – Unlike the other high priests, he does not need to offer sacrifices day after day, first for his own sins, and then for the sins of the people. He sacrificed for their sins once for all when he offered himself.

1 thought on “Once and For All”