One of the most picturesque sayings that has developed in the English language is that of “the elephant in the room.”  This of course speaks of an obvious problem or difficult situation that people do not want to talk about. 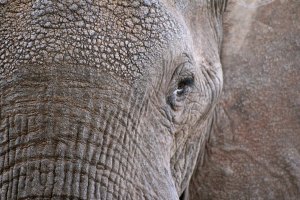 Luke 7:36 – When one of the Pharisees invited Jesus to have dinner with him, he went to the Pharisee’s house and reclined at the table. 37 A woman in that town who lived a sinful life learned that Jesus was eating at the Pharisee’s house, so she came there with an alabaster jar of perfume. 38 As she stood behind him at his feet weeping, she began to wet his feet with her tears. Then she wiped them with her hair, kissed them and poured perfume on them.

39 When the Pharisee who had invited him saw this, he said to himself, “If this man were a prophet, he would know who is touching him and what kind of woman she is—that she is a sinner.”

40 Jesus answered him, “Simon, I have something to tell you.”

41 “Two people owed money to a certain moneylender. One owed him five hundred denarii, and the other fifty. 42 Neither of them had the money to pay him back, so he forgave the debts of both. Now which of them will love him more?”

43 Simon replied, “I suppose the one who had the bigger debt forgiven.”

“You have judged correctly,” Jesus said.

44 Then he turned toward the woman and said to Simon, “Do you see this woman? I came into your house. You did not give me any water for my feet, but she wet my feet with her tears and wiped them with her hair. 45 You did not give me a kiss, but this woman, from the time I entered, has not stopped kissing my feet. 46 You did not put oil on my head, but she has poured perfume on my feet. 47 Therefore, I tell you, her many sins have been forgiven—as her great love has shown. But whoever has been forgiven little loves little.”

This entire scene is strange to our modern, western sensibilities. But if you understand eastern culture, a big dinner was a community affair. Everyone in town knew about, and anyone in town might just walk in and stand in the background and watch what was happening. It would be rude in the extreme to throw anyone out or lock others outside.

So among those who were in the room at the dinner hosted by the Pharisee what a woman of ill-repute, known to be so by the locals who would assume Jesus did know this. “Reclining at table” meant that they laid on their sides on couches, with feet extending away from the formation of low tables in the center – onlookers standing beyond. At the feet of Jesus is this woman grieving over her sins, anointing the feet of Jesus with an aromatic perfume, creating a plethora of sounds and smells that must have been rather disruptive – elephantish even!

Just as the Pharisee named Simon ponders to himself that Jesus has no concept of who this awful woman is, or he’d send her away or drop-kick her head, Jesus asks a question of him. He starts out by identifying the elephant in the room – Do you see this woman? What a question! Duh! Everyone sees the woman! But the question should have the emphasis on the word SEE. Did Simon really SEE this woman for the human soul that she was … a broken person in need of a new life.

And then Jesus drops the bomb on the other elephant. Though invited to the dinner, Simon did not do the normal and typical social graces of welcome regarding anointing and foot washing of guests. Jesus was invited, but he was really not welcomed. The awkward hostility was obvious, though nobody was confronting it.

We’re not like Simon, are we? Or are we? I don’t think many of us have a hostile attitude toward people who are very different, but perhaps we might not be terribly different categorically speaking if we are merely “indifferent.”  Maybe we look across the tracks, and maybe with minimal judgment if we think at all about what we see. But do we cross tracks out of compassion and love? Should we not want to be in warm relationship with Christians who are simply different by race, culture or economics? Should we not desire to see the grace of Christ reach to unsaved folks very different than ourselves, knowing that the only hope of a meaningful life in this world and life at all in the next world is dependent upon their relationship with Christ?

Elephants in the room can take up a lot of space. How about we clear out the pachyderms and look to God to use the opened space to pack our fellowship with all of the diversity to be found in the race – the human race – for which Jesus gave his life. We need to SEE across the tracks, which will likely make us GO across the tracks.